News
Home / News / What are the types of padlocks？
News

What are the types of padlocks？

According to the unlocking method Top open padlock: It […]

According to the unlocking method
Top open padlock: It means that the key is in the lower part of the lock, and the lock beam (lock hook) is pushed out after unlocking.
Straight open padlock
Open padlock
Crossbeam padlock (also known as giant padlock)
Password padlock: Because the padlocks opened with the key have a high mutual opening rate, especially the smaller padlocks, the high mutual opening rate is not suitable. Therefore, the password padlock has been developed. Its characteristics: up to 10,000 passwords .

According to material
1. Stainless steel padlock: This type of padlock is characterized by relatively strong oxidation resistance and is suitable for outdoor use. However, due to the difficulty of processing and the relatively high cost, it is less used in China.
2. Copper padlock: The main material of the lock is copper, and the more commonly used copper padlock is mainly small copper padlock, that is, the size below 40mm, mainly because the price of copper is relatively high.
3. Iron padlock: It is very common.
A. Electroplated iron padlock: table
B. Gray iron padlock: The surface is treated with gray paint, and then there are many colorful padlocks, all of which belong to this category.
C. Imitation copper padlock: In fact, it is an electroplated iron padlock, which means the surface is plated with copper
4. Zinc alloy padlock: This type of padlock is integrally formed by a die-casting machine with high precision.

According to the shape
1. Fork lock
2. Chain lock
3. U-shaped lock 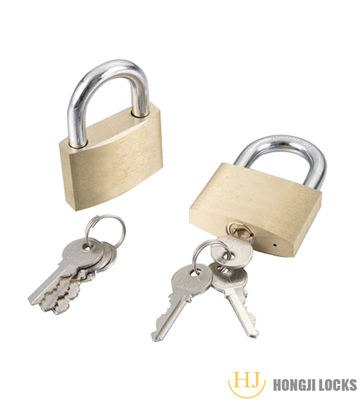 According to mechanical structure
Due to the structural characteristics of the padlock, the padlock is convenient and flexible to use and has a wide range of uses. It can replace other locks, and other locks cannot replace padlocks. It is an ideal preventive lock, but the padlock must be buckled with the convex hole of the object to be closed to play the locking function. The internal and external functions can be closed and opened, so it cannot be used in some occasions. For example, in some occasions with high decorative requirements or matching locks, padlocks are generally not suitable.
The classification method of padlocks There are many varieties and specifications of padlocks. Generally, the size of the lock is determined by the width of the lock body, and the purpose of the lock is determined by the height of the lock beam. The lock is determined by the opening method of the padlock, such as straight opening, horizontal opening, top opening, and double opening. Series.
Our commonly used padlocks generally adopt two opening methods: straight opening and horizontal opening.
That is, when the key is inserted into the key slot of the lock core, the lock that can be pulled up without rotating is called "top unlocking". This type of padlock is especially suitable for openers who hold babies or carry objects that are not suitable for putting down. The so-called "double-open padlock" refers to a lock that requires two keys to work when it is opened. Its confidentiality is strong. It is suitable for occasions where two people are required to keep and two people are present to open the lock at the same time, such as warehouses, silver warehouses, etc.

Internal structure classification
In addition to the classification of padlocks according to the opening method (straight opening, horizontal opening, top opening, double opening), we can also classify the padlocks according to the internal structure of the padlock. The common ones are the above types:
1. Marble structure padlock
This type of lock uses a cylindrical pin to set up obstacles in the lock core, so that the lock core cannot be rotated to achieve the locking effect. The marble structure is also one of the commonly used structures of locks. There is a kind of lock whose body is made of metal sheets stacked on top of each other, giving people a thick and sturdy feeling. It is called a "melaleuca lock", but its internal structure is also a marble structure, so it is also a marble structure type of padlock.
2. Padlock with blade structure
This type of lock uses sheet metal of various shapes to act as an obstacle and achieve the purpose of locking. This type of structure is often used in zinc alloy or its alloy locks.
3. Magnetic structure padlock
According to the principle of magnetic repulsion, a magnetic lock core system is adopted. A permanent magnetic metal partition with the same magnetic plate as the key is installed between the lock core slot and the safety pin. The key and the safety pin do not directly contact. When smoothly inserted into the lock core slot and rotated, the key touches the metal partition, generating a strong repulsive force, and the lock can be opened easily. In addition, the principle of magnetic attraction is used to close the metal plate and open the lock with a spring.
4. Chain structure padlock
It is composed of main lock and auxiliary lock. The main and auxiliary locks have mutual protection function and are related to each other. Connecting two auxiliary locks will lock the main lock. The main lock can only be opened after the two auxiliary locks are opened and removed.
5. Number structure padlock
A sliding plate mechanism is installed on the lock body shell of the lock. Its hole and groove are connected, which can be moved and rotated. The dial is connected with the rotator. The rotator is equipped with tooth-shaped or cam-shaped metal blades, which can be rotated and moved, as long as the number is dialed. , The lock can be opened by itself, and this type of lock does not have a key.

0
PREV: What are the advantages and disadvantages of zinc alloy locks？      NEXT: Which lock material is better？
Contact us